Irv Donaldson had a heart attack at work.

What his fellow employees did next saved his life.

Meanwhile, employee Jeff Wilson went and grabbed an AED, or an Automated External Defibrillator. The coworkers then used the device to shock Donaldson’s heart. Those quick actions all happened in about 7 minutes before paramedics arrived.

Paramedics say what they did helped save Donaldson’s life.

Call Now to speak with a AED Specialist

Chat? Click on the “Live Chat” button on the right side of your screen to speak now with a AED Specialist

CHAT, click on the Live Chat button on the right hand side of your screen

CHAT, click on the Live Chat button on the right hand side of your screen

Is your team ready to save a life?

He was playing soccer with his friend Luis when he suddenly collapsed and stopped breathing.

While a bystander began CPR, and someone called 911, the Jacksonville Beach Ocean Rescue truck were nearby.

“We were driving down the beach at 10 a.m., putting our lifeguards out on towers, when we heard screams for help,” said lifeguard Gordon VanDusen, one of the first responders. The lifeguards are certified in CPR and AED, and had just completed refresher training.

The lifeguards soon took over and using the AED shocked Bournes heart back to a normal rhythm. The lifeguards continued CPR until an ambulance arrived.

More than 350,000 people in the U.S. experience a cardiac arrest outside of a hospital each year. Cardiac arrest occurs when the heart’s electrical system malfunctions, causing the heart to abruptly stop. Unless CPR is performed and an AED is used to shock the heart, death can occur within minutes.

Call Now to Learn More About CPR Training and AED’s

Samuel Mazzeo stand out in the crowd. At 6-foot-5, the high school student played football, basketball and was on the weightlifting team.

On February, 23, the unforeseen occurred. Samuel went into cardiac arrest during gym class.

“I don’t remember that day at all. They told me I was running around like normal and I sat down because I wasn’t feeling good. And then I passed out and was unresponsive,” Mazzeo said.

“There was no time for us to be nervous or anxious. We had to do what needed to be She did CPR, while Secretary Hannah Hall brought the AED device and delivered a life saving electric shock to Mazzeo’s heart.

Thanks to this dream team of everyday school employees, Mazzeo regained consciousness and got to the hospital just in time.

“When I think about it, it’s crazy, I actually died. I never thought anything like that would ever happen,” said Mazzeo.

Mazzeo who was diagnosed with a heart ailment called ARVD, now has a pacemaker and defibrillator. 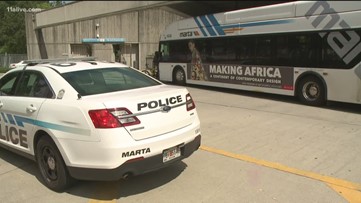 The officers used a portable defibrillator unit which was placed in all 38 rail station in 2009.

ATLANTA – Two men were saved by the MARTA Police after they both suffered heart attacks just hours apart from one another.

On Tuesday, April 17, Officer K. Softley, Corp. M. Woodward, Officer-in-Training B. Dennis and Sgt. L. Martin were told about a man who was in cardiac arrest at the Kensington Station at 8:48 a.m.

They used an Automated External Defibrillator (AED) and CPR to revive the man and kept him stable until they were able to transport him to a local hospital. Unfortunately, he later died at the hospital due to another medical issue.

Just over an hour later, those same officers were called to another person going into cardiac arrest at the same station and used an AED and CPR to stabilize that man and transported him to a hospital where he remains in stable condition.

“We have AEDs in each of our stations and our officers are trained in CPR,” said MARTA Police Chief Wanda Y. Dunham. “The fact that there were two separate cardiac arrests at the same station just an hour apart is rather remarkable. I’m proud of the way the officers responded.”

Neil Carew a longtime photographer, was in the school gym when he suffered a heart attack.

”When I turned around, he went down at that moment,” said coach and teacher Cathy Egger. “I went and shook him and called out his name a little bit and I said, ‘This isn’t working.’”

Egger then went to get help. She called our for Denis Minks Who was close by.

After calling 911, Principal Clay Hudgins ran into the gym with the AED the school had right outside of the gym

Longtime nurse Katrina Kalhleffel took the lead, opening the AED and placing the patches from the device onto Carew’s chest.

The AED advised that a shock was necessary. It then proceeded to shock twice before continuing with CPR.

“I don’t think he would’ve made it, possibly not even to the hospital. He certainly would not have left the hospital functioning as he is,” said Carew’s doctor Nils Johnson with Memorial Hermann. “When the heart stops, all of the organs in the body suffer. They don’t get the blood flow that they need. On average, less than 10 percent of people like him make it to leave the hospital with a meaningful mental status, that is, a meaningful mental recovery after this.”