Fred Bivins says he wouldn’t be alive today if Gary Szotko of Lewandoski’s Market didn’t know exactly what to do.

GRAND RAPIDS, Mich. — Friday, Nov. 12 started off like a normal day for Fred Bivins. The proprietor of Vinecroft Studios was trying to make room in the studio freezer for a Thanksgiving turkey. He pulled out some macaroni and cheese and thought it would go well with some smoked kielbasa from Lewandoski’s Market.

Owner Gary Szotko wasn’t scheduled to be at Lewandoski’s that day. But he was filling in for one of his employees when Fred came in. The two began to chat for about 15 minutes. On his way out, Fred returned to the counter and Gary knew something was wrong. “Fred’s eyes just rolled right into the back of his head. So I knew what was happening,” Gary said. Fred hit the floor. While first responders were on their way, Gary began CPR. It’s a skill he learned during his 28 years serving on the Grand Rapids Fire Department.

“We know that medically, any chances of survival are much greater the sooner you start CPR,” Gary said. “I called back to my son, Alex, who was working that night. I told him to call 911, which he did.” In minutes, first responders from Rockford Ambulance and Grand Rapid Fire Department Station #3 on Bridge Street, where Gary spent much of his career, were at Lewandoski’s to take over. “I ended up getting shocked five times somewhere between here and the hospital,” Fred said.

Fred spent the next three and a half weeks at Spectrum Health’s Meijer Heart Center. He doesn’t remember much of that stay, and he almost didn’t make it. He said Dr. Glenn VanOtteren and Spectrum’s critical care team helped nurse him back to health.

“One doctor said you were dead before he hit the floor, and the only thing that got you back was Gary. He knew how to do CPR, and that’s what saved my life” Fred said. On Dec. 8, at the urging of Dr. Sampson Ho, Fred was transferred to Mary Free Bed Rehabilitation Hospital just down the street, where he was treated for damage done to his body when he hit the floor, and during CPR compressions. “You don’t save a life without cracking bones, and I’ll trade the broken ribs for my life. I’ll never be upset that Gary did that to me,” Fred said. “Mary Free Bed is full of miracle workers. They honestly are, and I’m just grateful to all of those people.”

Fred says his doctors agree, he wouldn’t be alive to tell his story if Gary had not began CPR right away. So when Fred got out of Mary Free Bed right before Christmas, his first stop was at Lewandoski’s Market to thank the man who saved his life. 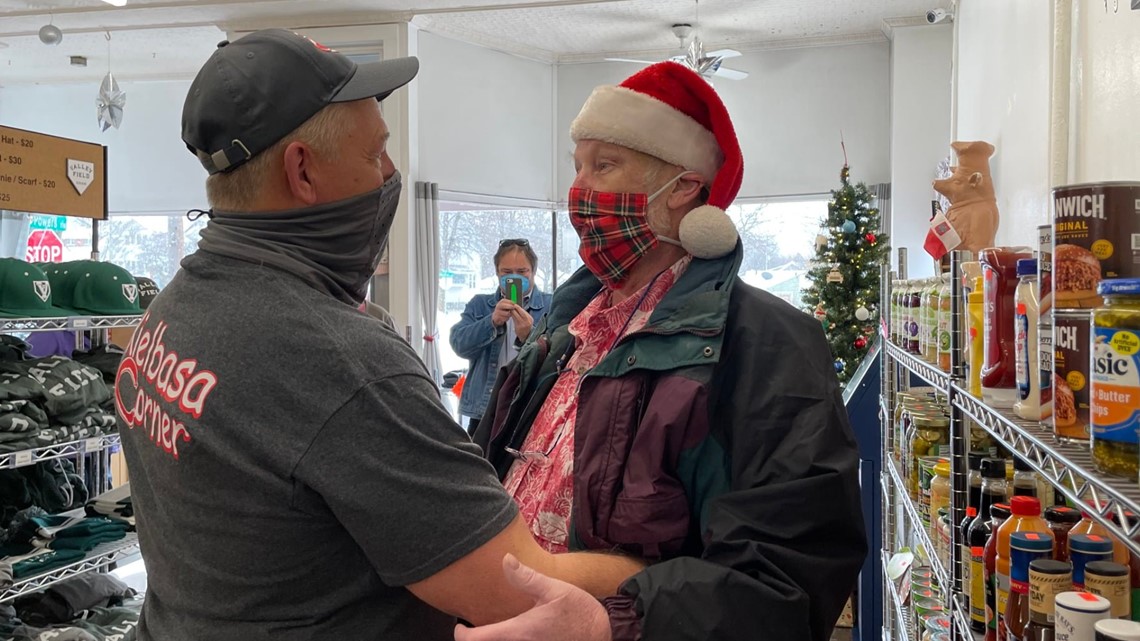 Fred Bivins meets with Gary Szotka just before Christmas after Szotka saved Bivins life in November. “I have a second chance at life because of this man, and there was no way I was going to go home from the hospital without stopping to thank him. And I’ll thank him every day of my life of my second life,” Fred said. The two cried together during the reunion, which was a surprise to Gary. “It was surreal, because I didn’t know Fred was coming. I looked up and Fred’s here. Yeah, just a big hug, and big cry. But I’m just very thankful, very blessed, and very grateful.”

Now, Fred is trying to pay it forward. He’s raising money to help buy an AED, automated external defibrillator, for the store. People who want to help can send money via PayPal to fred@vinecroft.com.

Meanwhile, Gary is going to make sure everyone who works at Lewandoski’s is CPR certified. Both Gary and Fred hope people who see this story would be moved to learn CPR for themselves.

Click Here to learn about CPR and CPR Certification