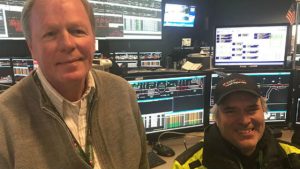 A Metro Transit train operator used his CPR skills to help save a life. Now, Metro Transit is sharing his story to show the importance of training for emergency situations.

Train operator Jim Peach took a CPR class 30 years ago after witnessing a fellow Northwest Airlines mechanic die of a heart attack. Then, on Sept. 19, 2018, Peach saw a crowd gather around a man having a seizure on a platform at the Cedar-Riverside Station.

According to Metro Transit, Rail Supervisor Jim Clancy called 911 from the Rail Control Center as Peach and a bystander removed the man’s backpack to lay him on his back.

Peach told Metro Transit he performed about 10 chest compressions before the man’s color returned. He then turned the man on his side and asked for his name. The man responded “Kyle.”

“That’s when my head about exploded,” Peach told Metro Transit. “It was great. I was just, ‘My God, that just worked.’ When I got up and left, a lot of people started clapping.”

According to Metro Transit, Peach knows firsthand the importance of saving a life. As a baby, he was in a house fire and was rushed to a hospital.

“I was very badly burned at four months old, and it took me 61 years and seven months to pay it forward,” Peach said in the press release.

In January, the Metropolitan Council’s Transportation Committee recognized Peach for his actions.