OSHA estimates there are 1.5 million lift operators in the United States.

That’s a lot of lifts and a lot of people around lifts. Pedestrians, lift operators, regulators, and employers agree; no one wants to see anyone get hurt. Forklifts and workers must remain apart. There are differing perspectives on who should have right of way (who yields to whom).

Forklifts are the second leading cause of machine-related death in the workplace. Struck-by and tip-over are the two leading causes of forklift-related fatalities.

Each year in the United States, on average, 100 die, 95,000 are injured, and 20,000 are seriously injured. An average of 60 lost workdays is incurred per incident (9x the average for all other injuries). Bad things happen when people and lifts attempt to share the same place in time. Regulators have an interest in preventing bad things.

Currently, more than half of all U.S. states are covered by Local Emphasis Programs that target industrial trucks and warehouse safety. Compliance officers will look more thoroughly at lift operations and may be more likely to visit industries known to operate lifts.

OSHA standards are still largely based on consensus standards that existed in the 1960s. The standard on industrial trucks was based on American Society of Mechanical Engineers (ASME) B56.1-1969 until the training portion of the OSHA standard was revised in 1998. The most current forklift standard is an ANSI/ATSDF Standard B56-2015.

Until recently, there wasn’t any language that clearly specified which party should have right-of-way. The 1969 forklift consensus standard that OSHA references just says to stay out of the way of ambulances, fire trucks, and other vehicles in emergency situations. The 2015 version of the ANSI standard, Section 5.3.2 provides the updated guidance to lift operators, “Yield the right of way to pedestrians and emergency vehicles such as ambulances and fire trucks.”

Pedestrians Lose in Collisions but Commonly Win in Court

The message is and always has been the same: separate forklifts and pedestrians. People are vulnerable relative to industrial vehicles and people generally have the right of way in plant settings (just as they would on public streets). Things usually play out this way in jury trials where negligence lands on forklift operators more times than not.

In August of 2015, $15.2 million in relief was awarded to a worker whose foot was seriously injured when he was struck and run over by a forklift at a trade show in Chicago. The forklift operator worked for the show’s organizer who was breaking down booths; the injured party was representing an exhibitor at the show. OSHA citations totaling $91,000 were issued for failing to ensure driver training, failing to ensure safe clearances for forklift operations, failing to train drivers on specific issues related to pedestrians present, and other related issues. The prosecution called attention to the weight of the lift (58,000 pounds) and entered testimony from witnesses alleging that the driver did not keep a clear view of his path and did not maintain a proper lookout or spotter.

In this case and others, most of the responsibility falls on lift operators. Cases like this imply pedestrians have right of way. Cases like this also show that being right doesn’t always equate to staying safe. 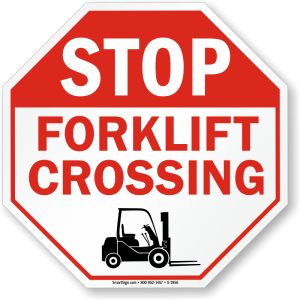 There has been a lot of regulatory focus on forklift operators, yet frequency and severity remain relatively high in comparison to other industry exposures. Maybe regulators have been focused on the wrong thing? Maybe forklift operators are not solely to blame when workers are struck by forklifts?

There is no standard that speaks to the responsibility of pedestrians. Leading companies preach mutual responsibility or “safety is everyone’s responsibility” and educate about the severity of forklift incidents, lift and operator limitations, and how to establish intentions through eye contact and hand signals.

Beyond education of lift operators and pedestrians, the workplace and lifting equipment must be maintained in good operating condition. This includes ensuring adequate lighting, good floor conditions and housekeeping, marking and protecting walk aisles, and allocating aisle widths conducive to lift operation. Last but not least, employer management systems must ensure proper diagnosis and closure of incidents and issues voiced.

When pedestrians and lifts collide, everybody loses. It’s important that everyone knows what their responsibility is.