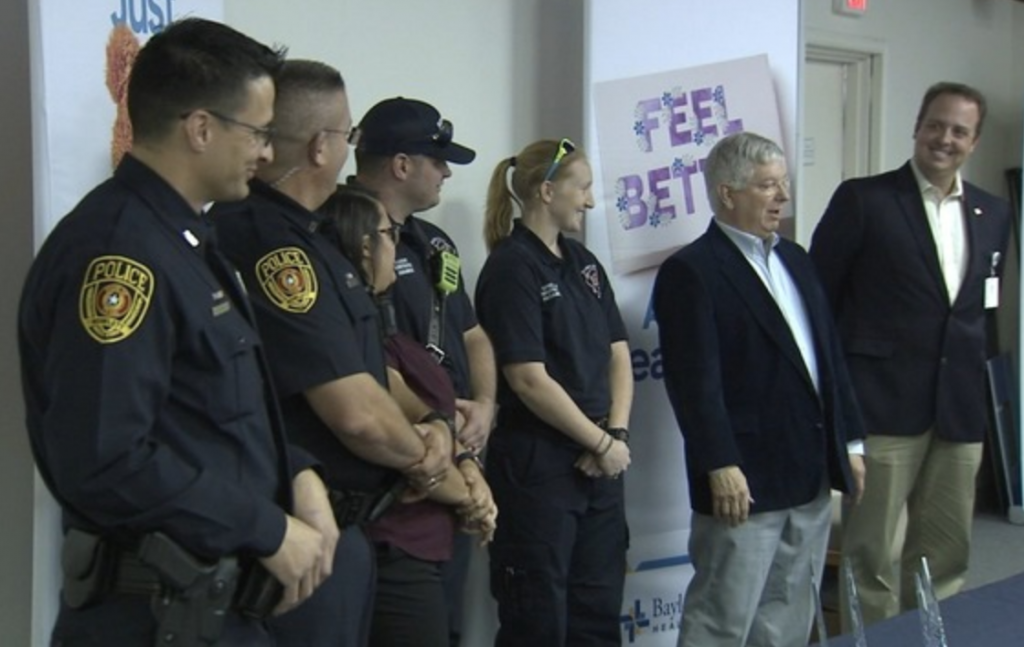 A group of first responders and a school bus driver in Rowlett were honored Wednesday for saving a 16-year old boy.

Bus driver Jim Griffin deserves most of the credit as what he saw and what he did helped make the happy reunion possible. “God just puts people where he needs them to be when He needs them to be there,” Griffin said.

Griffin was driving his regular school bus route on Brownlee Boulevard on Sept. 28 when he saw something that stopped him in his tracks.

“I rolled down the street and about another 60 yards, there’s a body lying in the street,” Griffin said.

He immediately got out and dialed 911.

“He’s face down in the street, I reach down, I feel for a pulse, there isn’t one,” Griffin said.

The 911 dispatcher told him to start CPR. He can be seen in dash camera video as police arrived, furiously trying to keep the teen alive. Griffin says as he rolled the teen over, he recognized his face.

It was Nabil Mohmoud, 16, who was born with a heart defect but had it repaired when he was born. He’d never had any problems until that day, when he forgot his wallet at home and ran back to get it.

Doctors say the rush back to the bus stop caused a sudden irregular rhythm in his heart and he collapsed in the street.

“I turned the corner and I ran, I think the middle of the street here is where I passed out is what they told me,” Mohmoud said. Griffin performed CPR until Rowlett police and paramedics arrived to jump in and help.

“At that point in time, you’re in cardiac arrest, you don’t have a pulse, you are for all intents and purposes dead. The only thing keeping you alive at that point in time is CPR,” said Dr. Jared Wolf, emergency medicine physician, Baylor Scott & White. That CPR bought enough time to revive the teen and get him to the ER.

“This amazing thing, that many people helped save his life, you know. That’s a good thing,” said dad Fakher Abdulamir.Mohmoud, words weren’t enough, but he was extremely thankful.

“I just want to thank them for everything,” he said. All were given an award for their efforts, but griffin says he already has his reward.

“The best thing that ever happened was he came back to my bus,” Griffin said.